The sandstones today designated by the term Jun, robust pieces coated with a thick opaque bluish glaze, were included only late in the "pantheon of Chinese ceramics", between the 16e and the first half of the 17e century. The production of these everyday objects, intended for wide distribution, began in Henan in the 12e century, possibly late Northern Song dynasty (960-1127), more likely early Jin (1115-1234).

The bluish color of the cover is produced by the passage of light through the rich and creamy textured coating. On the flat of the museum, three purplish highlights born from flakes of copper oxide, irrigate the coating. This covers the beige-orange shard up to the top of the foot where it draws a very irregular line. Its lower edge is marked with traces of pernettes, linked to the classic method of charging these ceramics. This dish has been restored with gold lacquer using the Japanese technique of kintsugi.

Gift of the Society of Friends of the Cernuschi Museum, 1942 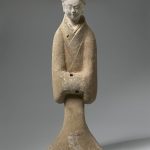 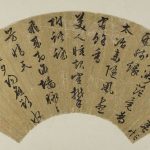