Part of the furniture and support of the painting, the screen (byōbu) is an object surprising by its plasticity: it folds and unfolds, unites and divides the pictorial surface.
The oldest screens that have come down to us date from 8rd s. and are kept in the Shōsōin Treasure in Nara. One consists of six leaves, each representing a beauty under a tree. The style is very clearly influenced by the aesthetics of the Tang. The other, carries Chinese moralizing texts and was supposed to be near the seat of the emperor.

From these two examples, we see that a screen is not defined by its decoration but by its surface: it is made up of leaves, generally six in number. Each sheet can be autonomous but also can respond to the one that precedes or follows it.
The byōbu is a movable object, made of several panels, or sheets, articulated, which folds and can be stored. Screens are often opposed to fusuma linked to architecture. Fusuma are the sliding partitions that define the space of a room and can act as doors. Although perennial, they can be taken apart. They are also supports for paintings to create an atmosphere and the decor is designed to give rhythm to the progression from one room to another. Conversely, screens are completely mobile, they can be moved and placed in different parts of a room and chosen according to the circumstances.
A screen from 17rd s. is decorated with a scene from "The Annual Court Ceremonies", a set of sixty scrolls commissioned by retired Emperor Goshirawaka-in, in the second half of the 12rd s. If this set was lost during a fire in 1661, there are several lines of partial copies. What is interesting here is the representation of a banquet in the courtyard, in the upper part. Two sides of the room are carpeted with byōbu adorned with landscape paintings. Each sheet is surrounded by a braid (or trimmings), typical of the first copies. It seems that at the beginning the screens worked not only in pairs but in much larger sets of up to twelve. A protocol document dating from the beginning of the 12rd s. shows the plan of a religious ceremony in the imperial palace. We see screens arranged in certain places to create a different atmosphere and qualify this place of everyday life.

The “journal of what I saw and heard” kept by Prince Sadafusa (1372-1456) enlightens us on the use of screens. The prince, who receives eminent friends for a poetry reunion, describes how he decorated the room: there are, of course, installed two pairs of screens, but the most important elements are paintings. For Tanabata's feast, he borrows a pair of screens as well as another to decorate the room. This shows that we could lend them depending on the desired effect; moreover, they are not only placed in pairs. In another passage, it is about two pairs of screens on which we have hung seven paintings mounted in vertical rolls. It seems that, in this case, the screens were laid out flat in front of the fusuma and the kakemono were Chinese-style ink paintings while the screens were of Japanese sensibility. This clearly shows that screens are not viewed as works of art, but are there to create an atmosphere.
On a scroll from 1351 which tells the story of a monk, we see a meal scene where a noble adolescent visits the monk. Behind the latter, a large screen is deployed to magnify the space and pay tribute to the visitor. On another scroll of the same story dating from 1482, a scene shows the reception of the monk by a high personage. Both are leaning against a large byōbu with a gold background adorned with pine trees. In the adjacent room, a childbirth takes place and it is surrounded by screens to preserve the privacy of the moment. These screens have a white background with a very light decoration in ink or mica to ensure the purity of the place. Only two pairs would remain.
In a painting by Kawahara Keiga (1786-1860), “The Life of a Man”, two scenes linked to death show that the screens placed in the rooms were placed upside down.

A pair of screens decorated with byōbu dating from the 18rd s., kept at the Metropolitan Museum, is unique in that it shows a whole set of different formats and decorations, like a catalog. We see a screen illustrating the Tale of Genji with several scenes spread over the gold background. In front of it is another one with a gold background but adorned with a single scene from the Tale of the Heike representing the battle of Ichi no tani. Next to it is a screen decorated with a Chinese-inspired landscape. On the other screen, a byōbu illustrates a fashion of gluing painted fans to the surface. The subjects of this pair could evoke spring for the one on the right and autumn for the one on the left.

The surface of a pair of folding screens can be treated in different ways.

Each sheet receives an independent painting.
This was the case for the first byōbu as we saw for those dating from the 8rd s. A pair of screens, from 17rd s., illustrates the life of peasants in 12 months, each month being on a sheet.

A unified counterbalanced composition.
On a pair of screens attributed to Shūbun (15rd s.), Landscape over the seasons, the composition, balanced, can be read from right to left and occupies the entire surface of the two screens, starting in spring on the far right and ending with winter on the far left . Likewise, there is an opposition between the one on the right which illustrates the day and the one on the left, the night. Note that the center is treated more lightly while the two ends are more loaded, creating a diagonal composition. This is also the case on a pair attributed to Sesson Shūkei (1504-1589) which shows gibbons in a landscape. Although the center of the stage is not empty, the two ends are occupied by trees which frame the whole. Here the screens can be read independently or put together to form a large scene.

A contrasting composition.
Each byōbu carries a pattern that responds to the other. This is the case of a pair painted by Nagasawa Rosetsu (1754-1799) which represents, on the left, a large gray buffalo and, on the right, a white elephant which struggles to enter the frame. Each gigantic animal is accompanied by smaller ones; a small white dog is nestled against the side of the buffalo while two black crows are perched on the rump of the elephant.
Another pair, by Sakai Hōitsu (1761-1828), pits a white plum tree against a red plum tree, with each tree occupying the center of each screen.

A progressive composition.
This system is particularly used to evoke the passage of the seasons.
Hikone's byōbu, mid-17thrd s., illustrates the “Four Hobbies of the Literate” transposed in a reserved area in the style of the Kanō school.
Reading can be done two sheets by two sheets. On the left, the music is evoked by a group playing the shamisen in front of a byōbu. The adjacent sheet shows another group playing the game of sugoroku on a board. The next two sheets illustrate the painting and poetry associated with calligraphy. A group of women in discussion with a young man occupy the last two sheets. Clothing and personal items suggest the four seasons, as in traditional “images of the four seasons”. When the screen is put in accordion it really gives the impression that each group has an interaction on two sheets.

This impression of dialogue between the sheets is found on two byōbu of two panels. Keep cool under the arbor of volubilis by Kusumi Morikage (1620-1690) shows a peasant family cooling off on a summer evening. The characters seem to be looking at the moon that appears on the other sheet. Shoki trapping a demon in a spider web by Soga Shohaku (1730-1781), also on two sheets, opposes Shoki (Zhong Kui), treated in a powerful way in ink, to the demon caught in the canvas which, for his part, is painted in more detail and with a lighter brush.

Individual scenes in the middle of clouds.
This is often the case for the illustration of episodes taken from literature such as Tale of Genghi, scenes of festivals or famous places.

A composition on a centered motif.
The pattern is centered when the two screens are placed side by side or occupies the center of a single screen.

A decorative composition.
These are often birds, flowers that can have a symbolic meaning and are distributed over the entire surface. This genre is often associated with the Rinpa school.

It is useful to remember that Japanese screens were very popular in the West and contributed to the spread of Japonism. A painting by James Tissot (1836-1902), Young Women Looking at Japanese Objects (1869), shows two young women carefully examining a six-leaf screen decorated with the battle of Yashima, which often parallels that of Ichi no tani ( Said of Heike). In, Caprice in Violet and Gold - The Golden Screen (1864), James McNeill Whistler (1834-1903) testifies to this Japanese fashion at the same time. A young woman in a kimono looks at prints in front of a gold-ground byōbu. It is obvious that the Westerners appreciated screens in a very different way from that of the Japanese. 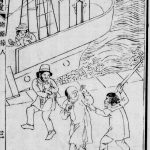 The tragedy of the Chinese coolies in Cuba and Peru in the 19th centuryCHINA, Conference Reports 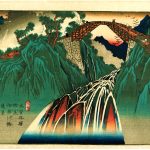 Travel on the Kisokaidō road, from Hiroshige to KuniyoshiConference proceedings, JAPAN