This work with its very powerful composition is emblematic of the style of Oda Shitsuhitsu. This is a close-up view (taiga) of a trunk of a cherry tree in blossom, of which neither the top nor the base are visible, detaching itself by drawing an S on the silk support. Its bark is obtained using broad and semi-circular brush strokes, without preliminary outline, using an ink sometimes denser sometimes lighter, which gives depth to the pattern. The naturalistic rendering is accentuated by the occasional use of malachite green, intended to evoke the presence of lichens.

Specializing in flower paintings, the artist has a sense of detail and botanical observation that place her in a realistic pictorial current where the Western influence is perceptible. Oda Shitsuhitsu is one of the few female painters who asserted themselves during the Edo period. Descendant of Oda Nobusada, ninth son of the military leader Oda Nobunaga (1534-1582), reunifier of Japan, great art lover and patron, she embraced the career of painter around 1796 by becoming the pupil of Mikuma Rokō, she same talented painter.

Gift of the Society of Friends of the Cernuschi Museum, 2012 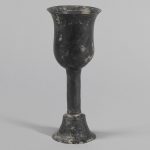 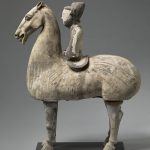