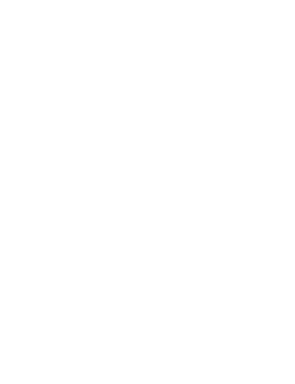 Gupta art: an aesthetic of perfection

By Madame Amina Okada, Chief Curator at the Museum of Asian Arts - Guimet

This conference was a great addition to the guided tours of the Grand Palais exhibition in May of this year and Amina Okada passionately and lovingly animated this beautifully illustrated presentation.

The period of the empire of the great Gupta (XNUMXth-XNUMXth centuries AD) is considered to be the apogee of classical Indian civilization, but it was also a period of innovation and the establishment of an iconography that will influence quickly all the civilizations of Asia.

Amina Okada first insisted on the quality of the coinage of the Gupta emperors, which fortunately complements the too rare inscriptions. Goddesses such as Lakshmî or Durgâ are often represented on the reverse of coins; Lakshmi was the goddess of fortune, guardian of cities and, as wife of Vishnu, protector of the dynasty.

The Gupta emperors favored vishnuism but remained extremely tolerant towards other religions and this period saw many innovations in all areas of iconography.

The animals, mounts of the gods, appear and settle under the Guptas.

The seal of Bhitari giving the genealogy of the dynasty is surmounted by a Garuda (mount of the god Vishnu) in the form of a bird with human head.
Vishnu is the master and radiant deity of the Gupta dynasty and his avatars are brought to ten, some of which will become very popular.

The Gupta continue the tradition of the excavated buildings of the Deccan, at Udayagiri, the 5 cave is dedicated to Vishnu. A large bas-relief illustrates the third avatar of the cosmic boar (Varâha) who saves the goddess Earth. The personification of the rivers by two river goddesses, another novelty, in the form of young women carrying a vase, standing on a makara for Gangâ (the Ganges) and a turtle for Yamunâ, emphasizes the aquatic atmosphere of the scene, as the Ocean figured by a man holding a vase in the middle of the waves and the presence of King Naga.

Vishnu is also often represented in the VIe century under its fourth avatar of the lion-headed man: Narasimha.

The notion of Bhakti, devotional movement, also appears under the Gupta. The temple of Deogarh (beginning of the VIe century), one of the few Gupta temples still pretty well preserved, is dedicated to Vishnu in its different aspects. Three remarkable carved panels dramatically illustrate episodes from Purana : Gajendramoksha (Vishnu sitting on Garuda frees the elephant bitten by a crocodile under the eyes of the assembly of the gods), Vishnu Anantashayana (the god, lying on the snake Ananta, meditate on the world in its cosmic sleep, surrounded by the major gods of the pantheon), Nara-Nârâyana (seated under the Badarî tree, he dispenses his science and removes all animosity from even the most savage animals).

The time also sees the personification of the attributes of Vishnu: chakrapurusha for the disc and gadadevi for the club.

Shaivism also thrives under the Gupta and benefits from innovations. We see the appearanceekamukhalinga, linga adorned with one (Acc. n ° 76.223) or four faces, the representation of Shiva master of music (Vînâdhara) seated on his mount, the Nandin bull (Acc. n ° GR.5129), and especially Shiva lord of the dance (Natesha or Natarâja). The first representation would be a fragmentary bas-relief of the Ve century (Acc No. 76.222). We see the god, wearing a bun adorned with a diadem of wicks, in the classical position of the dancer. We find this figuration in the caves of Ellora or Elephanta but it will be the most successful in southern India. The representation of Shiva in the composite form mid-Shiva, mid-Pârvâti (Ardhanārîshvara) is also fixed under the Gupta. They are no more than one, "like the word and its meaning," according to the poet Kaleidasa.

It was under the Gupta era that the worship of the Goddess, divine mother with multiple forms took off. Durga, the personification of supreme energy (shakti) is often represented sitting on a lion and armed with a trident (Acc No. B.592) or in Mahishamardini, destroyer of the Buffalo Demon (Acc No. 152). She may also be represented as victorious and crowning herself with garlands of flowers (Acc No. 12.261).

Ganesha or Ganapati, an elephant-headed god is the chief of the gana, misshapen dwarves from Shiva's entourage. At Ve century, Hinduism grants him the status of a major autonomous deity; its cult becomes very popular and its iconography will be fixed (Acc. n ° N5 4951 / A 25063). In the statue (Acc. N ° 2.537) the representative leaning on the shoulder of a gana, this one could be the bowl of personified treats.

Sûrya, god of the sun of the Vedic pantheon, keeps a foreign appearance with his long tunic tight at the waist by a buckled belt, his pleated trousers and his boots which recall the Sassanid costume (Acc No. T.13 or Acc. ° NC.43).

The planetary deities (grahaAt first seven, then eight, were borrowed from the Hellenistic world, but their iconography is purely Indian. Although perfectly understood, the phenomenon of the eclipse will be personified by Râhu, a character with a fierce expression (Acc No. 9516 / A 25107).

It's at Ve century that some of the twenty-four jina or tirthankara of the Jain religion have their iconographic specificity set, which makes them identifiable.

During the Gupta era, Buddhism sees the confirmation, development, and fixation of the Buddha's iconography.

Buddhism is going to be particularly prosperous at Sarnath, the site of the first sermon, and the sculptors' studios will fix the iconography and export it. Able to study at the school of Mathura, Sârnâth's art differs in the finesse of the silhouette, the fluidity and refinement of the treatment as well as the interiority infused into the faces. The Buddha is shown standing or sitting but wearing the diaphanous monastic mantle that hides the body and reveals it at the same time, asexual body, a reflection of spiritual perfection. Gestures (mudra) are also fixed at this time and the gesture of setting in motion the Wheel of the Law (dharmachakra mudrâ) becomes frequent (Acc. n ° 258, Acc. n ° 234). Likewise, the main events of the life of the Buddha will be illustrated and codified: birth, the first steps in the cardinal directions, the victory over Mâra, the first sermon, the stay in Heaven of the Thirty-Three Gods, the great miracle of Shrâvastî, the Mahaparinirvana at Kushinagara, the last stage of his last existence in this world.

Amina Okada then showed us some photographs of Adjantâ paintings which, although made in Vâkâtaka territory, vividly reflect the Gupta aesthetic: grace, elegance and attention to detail do not prevent freshness and a certain sense of movement. . Boddhisattvas, courtiers or servants are “sketched” with astonishing realism within a learned architecture or lush vegetation. The work of highlights to bring flesh or jewelry to life is particularly interesting and effective.

The painted or carved ornaments of these gods or princes let us glimpse the sumptuousness and refinement of the Gupta jewelery of which nothing remains.

Fortunately, conventions and a codified vocabulary did not stifle the inspiration or virtuosity of Gupta artists.

For them, human beauty does not exist as such and aesthetic qualities are an aggregate of elements borrowed from nature: metaphors transposed into sculpture or painting.

To conclude her presentation Amina Okada read us a passage (The messenger cloud - Meghaduta) of the great poet Kâlidâsa:

“I recognize your body in the liana; your look in the eyes of the fearful gazelle; the beauty of your face in that of the moon; your hair in the plumage of peacocks and, in the light banks of streams, the play of your eyebrows: alas! shy friend, by itself no object is enough to look like you ”.

This codified beauty is sublimated by inspired artists who managed to breathe life despite the shackles. 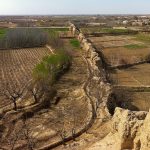 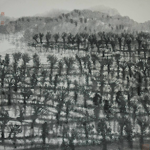