Kim Jungman at the Cernuschi museum on the occasion of the Nuit Blanche.

Kim Jungman was born after the Korean War in 1954 in Cheorwon - South Korea. As a teenager, he left his country for Africa. Then began a long philosophical quest which finally led him to Europe where he studied painting from 1974 to 1977 at the National School of Arts in Nice (Villa Arson) before discovering a passion for photography. In 1977, Kim won the Young Photographer Prize at the International Meetings of Photography in Arles, but far from his roots, he finally returned to Korea. From then on, he found his way into fashion photography in the 80s and 90s in Asia, influenced by Richard Avedon, Helmut Newton, Sarah Moon and Herb Ritts. In 2000, the korea.com site placed him among the 33 most influential men in the cultural world in Korea and named him "Fashion Photographer of the Year". In 2007, he left behind a flourishing career as a professional photographer to take an interest in the countryside landscapes of his native country. New artistic perspectives opened up to him, quickly giving birth to an abundant work of unheard-of artistic strength recognized on the international scene.

EAST
Kim Jungman has created a strong link between its history and the ancient East. The images of the series "East" seem to be the modern reincarnation of the original nature of Asia which had inspired the winter landscapes painted by Li Cheng during the Song dynasty (960-1272), or the dreamlike paradise landscapes. by Ahn Gyeon during the Joseon era (1392-1910). The monumental (260 x 468 cm) and extraordinary character of the two photographs presented at the museum invite the viewer to enter the heart of the intimacy of these immense allegorical landscapes. These compositions evoke both the pilgrim's peregrination and the hermit's meditation. withdrawn in the mountains which, in Asia and especially in Korea, are high places of spirituality.

Pillars of the East

Hanbok
Kim Jungman has been working on this series for over ten years. It's in the middle of a shoot for the house of Chanel with models dressed in hanbok, that he realizes that this traditional garment constitutes the true image of Korea. During the Lee Dynasty (1392-1910), Korean kings codified the wearing of clothing. Each of the classes in Korean society was recognizable by the way they wore the hanbok traditional, especially on the occasion of weddings and funerals. Beyond fashion photography, Kim Youngman explores the complexity and diversity of this traditional costume by confronting it with the contemporary world and immersing the viewer in the history of Korea. 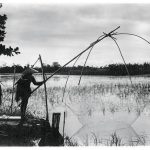 Objectif Vietnam - Potographies of the French School of the Far EastExhibitions 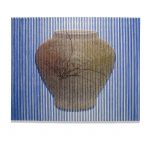