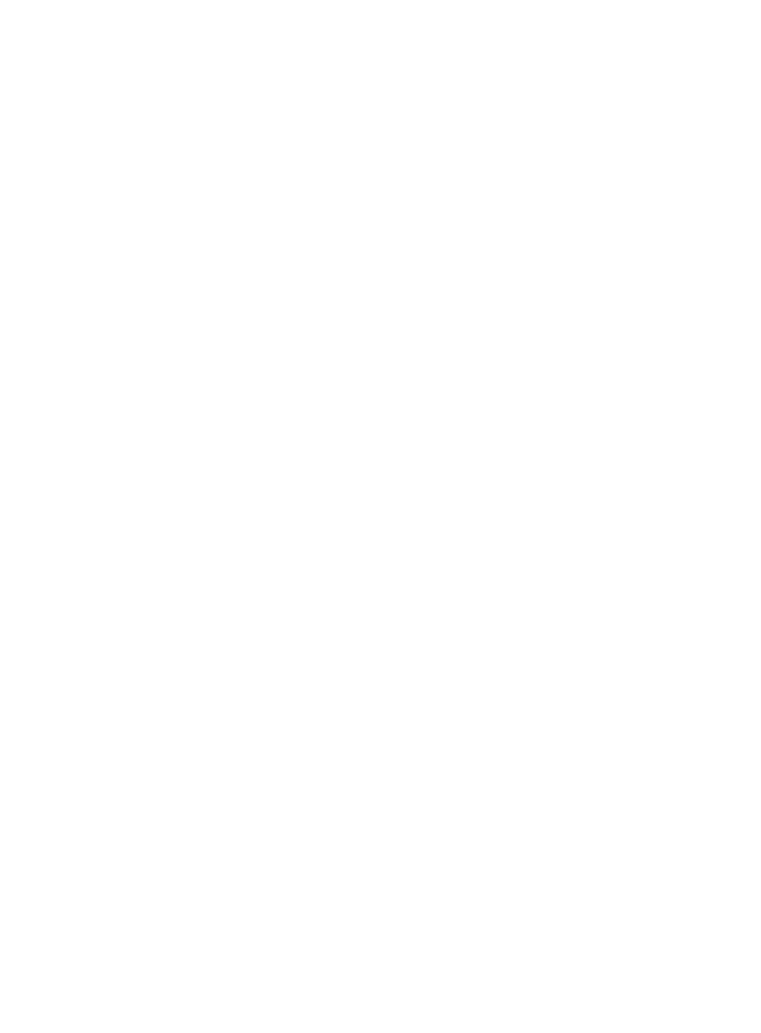 Foujita, painting in the roaring twenties

Wednesday 23 May 2018: Foujita, painting in the roaring twenties, visit-conference at the Maillol museum.

Tsuguharu Fujita (1886-1968) is the son of General Tsuguakira Fujita and Masa, who died prematurely in 1891. The family cradle is particularly cultivated and open to new Western ideas. Tsuguharu enrolled in French lessons in elementary school, studied Western-style painting at the Beaux-Arts in Tokyo and graduated in 1910. He had only one idea in mind: to go to Paris! After negotiations with his father, he obtained permission to go to Paris for a period of three years because he was engaged to Tomiko. In 1913, he landed in Marseille and went to Paris in the Montparnasse district. There he met Pablo Picasso, Chaïm Soutine, Amadeo Modigliani, etc. The shock of working with all these artists from the School of Paris pushes him to forget what he knows and to throw himself fully into the battle of the avant-garde of modern art. He remained however influenced by the two traditions, European and Japanese, and, during the first years, he painted in a style sometimes Western, sometimes Japanese. He spends a lot of time at the Louvre to soak up the Italian or French primitives from which some of his works are inspired, while giving a glimpse of the personality of the artist who will assert himself. Foujita (this is how he called himself when he arrived in Paris) is particularly cultivated; he is a museum man who penetrates works of the past to build his own style. He will also assimilate the work of his contemporaries, without ever copying them! However, he painted with fine calligrapher brushes, unlike artists of the time who used wide brushes.
The years of war drove him to London and to work as an art restorer and tailor. Back in Paris in 1917, he informed his father of his decision to stay in Paris and married a young woman painter, Fernande Barrey (1893-1974). The latter pushes him to exhibit at Galerie Cheron and there are two hundred watercolors on paper that are sold between June and November 1917. This is totally unexpected during the war and launches Foujita's career. These watercolors, which include Fernande and other models, refer to antiquity (Etruscan, Egyptian) or African art.

His first works, such as Standing woman, destructure the landscape. In The Little Buddhathere is no hierarchy between the central figure, the plants and the animals which are treated with the same minutia. They are storied in the composition but without really having a relationship between them. He can treat a conventional Japanese subject as Le lutteur in a very unusual way, the plating on the glass, which makes the wrestler the "reflection" of the viewer. He sets his subjects apart on the canvas without really worrying about the perspective or the depth and then paints the background. The subjects are surrounded by a black halo (which will become white later) because they are painted before the background.
Foujita will also build a character and play the difference, which leads him to stage himself in front of the lens and to cultivate the self-portrait in photography as in painting. He is one of the first to understand that talent is not everything and that promoting himself by his art of appearing is also important. He rubs shoulders with young photographers and is passionate about photography (he will leave a lot of clichés and self-portraits). Adoring to disguise himself, he sews his disguises himself. However, the public figure, dandy, mundane, and healer hides a hard worker in the secrecy of his studio.
In 1918, Foujita, Fernande, Soutine and Modigliani, invited by the art dealer Zborowski, make a summer stay in Cagnes-sur-Mer. He will meet Renoir at the twilight of his life.
Back in Paris, he tackles religious painting in a "Gothic-Japanese" style that he exhibited in 1919 at Galerie Chéron. Impregnated with Catholicism (he learned French with the Brothers of Mary), Foujita appropriates the iconography but transcribes it in a very personal style. He took part in the Salon d'Automne, then in 1920, at the Salon des Independants. He is quickly in all the Painting Salons, not only in Paris, but in Brussels, Germany, the United States and even Japan. It was at this time that he began to paint on a white background made of mother-of-pearl crushed with ink and oil paint.

In 1923, he leaves Fernande for Lucie Badoud (1903-1964) whom he calls Youki and who will be one of his favorite models. He triumphs at the 1924 Fall Salon with his portrait Youki, goddess of the snow. If they are of all the festivals, from Paris to Deauville, Foujita and Youki are united in a process of artistic creation. The Roaring Twenties see Foujita come to the fore, partly because of his eccentricity, but also because of his talent and hard work. He says he sleeps only five hours and often works for sixteen hours. He meets at that time the young German Expressionists of Paris and again, imbued their works and produced some paintings like Lupanar in Montparnasse ou Three women, in this spirit.
Foujita says he had more than 3 models in the Roaring Twenties, their names are Aïcha, Kiki, Youki, Mado, Claudia, etc. While in Japanese painting there are very few nudes, the artist will paint a large number of female nudes, seeking the essence of his models and magnifying them thanks to his technique and his sobriety. He multiplies sketches and sketches before tackling oil painting and often produces the final work in the absence of the model. In his female nudes, he does not hesitate to confront the painters of the past but passing the image through the filter of modernity.

At the beginning of the 1920 years, the painter invents a process, which he keeps secret, allowing him to obtain the famous white backgrounds. By applying a multitudes very thin layers of various whites to which he adds pigments in small quantities, he obtains an opalescence that gives his works transparency and delicacy. The figure or figures are always executed first and the bottom last, opposing the precision of the line and the model to the almost random bill of the bottom. While his colleagues from the Paris School work a lot of color, Foujita is distinguished by the delicacy of his palette.
Very early, Foujita painted portraits of children with whom he maintains a great complicity. His portraits are recognizable by their intense gaze, charged with complex feelings, melancholy and false innocence. This theme that is dear to him will allow him to live well, thanks to many orders.

In 1928, he receives the order for four large panels intended for the Japan House of the Cité Internationale. But these two diptychs do not please the sponsor and he will deliver in 1929 another set that is still there. The purpose of this order was to make the Japanese culture known to the nationals of other countries, but the style is that of the artist and the titles, Great composition et Fighting, do not identify the subjects. The paintings abound with academic nudes and animals; that seems almost a tribute to Western art as the quotes are obvious: the Last judgement of Michelangelo, the Venus in the mirror Velasquez or the Baiser of Rodin, among others. The models are recognizable, be it Youki, Kiki de Montparnasse, Aicha and even Picasso. An incredibly varied bestiary populates the space between the characters without really having any relationship with the story, if indeed there is one.
He will also make a decoration for the Circle of the Allied Union. For these panels, Foujita adopts the bias of Japanese naturalism, inspired by the work of Ito Jakuchu (1716-1800), Kyoto painter famous for his representations of flowers and animals. The four panels (on eight) are immediately reminiscent of a lacquer screen while the artist painted in oil on a background of gold leaf. These gold leaves, instead of being placed on the bowl of Armenia, are applied directly on the panels, which poses a problem today to the restorers.
The still lifes of Foujita make as much reference to Western art as to A surimono Japanese. He paints the everyday objects that inhabit his studio, staging them and thus testifying to his love for sewing or the little things of existence. These works are characterized by a miniaturist precision but are illuminated by the poetic light which is specific to it.

Hands-on, Foujita also experimented with decorative arts, painting fans and designing furniture trompe-l'oeil marquetry decorations. Her great friend, Speranza Carlo-Séailles, will produce a number of Lap stone works, based on her husband's research on cement. The cats, rabbits and cherubs of Foujita enamel these panels of a thousand crystalline colors.

On October 31, 1931, Foujita left France in the company of a young dancer, Madeleine Lequeux. Realizing the growing affair between his friend Robert Desnos and Youki, he confides this one to her while he leaves the latter with enough to meet his needs and everything that is in his workshop (she will give him back all on his return). This trip through the Americas lasts two years before taking the couple to Tokyo where they are greeted like a star. It will also have enabled him to flee the economic crisis threatening Europe and to find a new artistic breath. 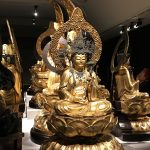 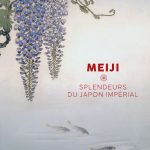